0537 GMT+2 (We think. Has daylight saving come in yet? What time is it at home? What time zone are we in? Really, we’re clueless)

The first glimpse I have of Turkey is the lighthouse at Dalisa Yasak. With the height of it we can see it from a great distance, even allowing for the curvature of the earth. As we pass the reassuring flash of Nicos Sesklio’s unwavering beacon to those on the sea, the Rhodes channel opens up to us. Rhodes and mainland Turkey are shrouded in cloud, but the sky above us is clear. As the day brightens from night I can discern the shape of our destination from the cloud. It had been a busy night, but I had missed it all. Slept for nearly six hours, dreaming of an amalgamation of ex-girlfriends, in cahoots with a drummer mate who was a serial killer. It was my first nightmare at sea, I thought I was going to die. On waking, I wasn’t convinced otherwise. I was in the act of slipping out of my sleeping bag, the blanket long fallen away from me. We had the same conditions as the first twenty four hours of this epic trip. Rolling seas from astern pitching Eve from side to side, making things difficult to manage. I stayed asleep longer than I thought. When I finally decided that enough was enough, to my surprise it was already 0300, time for my watch. Mark was still up, happy that we had made great progress. It’s amazing, the difference an extra knot or two can make. Without wind we average five and a half knots, with, it goes to seven and more, giving us an extra fifty percent. We have cruised so much of this voyage. So unusual. Usually it’s honking at this time of year. I say it once again, we are blessed. As my watch begins, I feel the sea quieten. The wind speed plummets downwards. I watch it drop from eight to four and a half in as many seconds. Another quiet watch after the other men had plenty to keep them on their toes. We pass Greece’s last headland and the Captain can relax and get some sleep. We’ll be on land this afternoon. No big rush. We’ll savour our last little time with Eve. 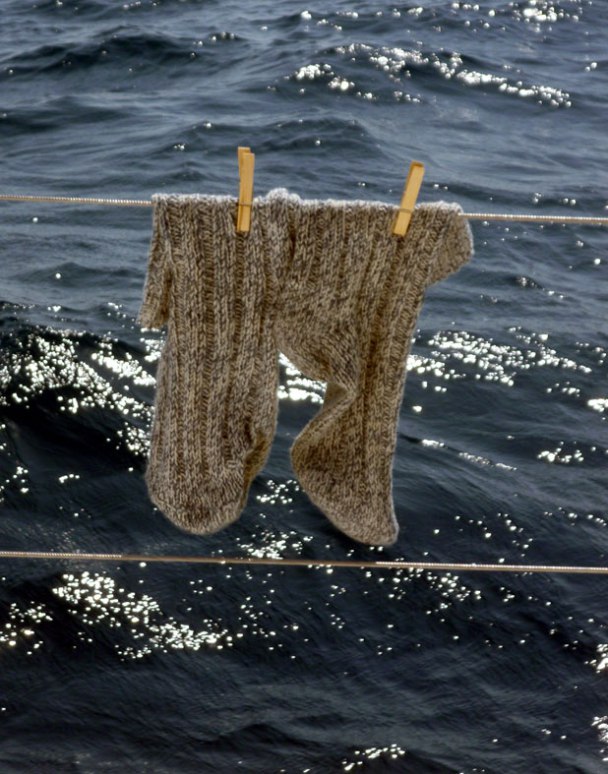 We’ve crossed into Turkish waters as I write this. The cloud bank is now further away, towards Syria, Irag, the volatile middle east. It’s been a while now since Pylos, anything could be happening but we’ve seen no evidence of impending war. Not on an international level. It would be nice to know that they’ve calmed themselves down in the large country that would be our next port of call if this odyssey were to continue eastwards. At Göcek we stop, wait, change boats and head back west. Last leg, just as we are getting used to life here, Dan and I, we’ll finish. A journey for sure, in every way. Some voyage!

There’s no sign of Adam. We lost them yesterday afternoon onto evening. Possibly it was their mast light we could see as it got dark and we looked for the lighthouse at Vrak, Kandelioussa, back at 26°57′ east. That was when I went below to sleep. Pete had been on the radio at around three o’clock yesterday afternoon. He had his engine up to twenty two hundred RPM, burning fuel with impatience. The skippers seem to want to finish the job, the closer we get, but it’s interesting to watch Mark get more attentive at this late stage. Just like they say that most car accidents happen within five hundred metres of home, when the driver’s attention is low as they relax, switch off, turn on their autopilot. Mark is switched on even more than usual. We’ve been in good hands on this trip. A wealth of experience. I wasn’t sure if I’d be up for doing this again. Or the ultimate delivery, the transatlantic. Now I know I’d love it. We’ve had it so easy on this one, but I could never turn down the challenge of heading along the trade winds to Central or South America. We’ll see, as ever.

I’ve let the men sleep through, they’ll arise soon enough. We have some wind, I’d love to let the headsail out but I’m not sure if I should, so I won’t. Loads more to learn before I can call myself Able Seaman Doyle. I still think in terms of aircraft jargon, but I’m improving. I should try for a pilot’s license, having always wanted to fly. I guess it must be similar enough, the oneness with everything, the reliance on the whims of nature and your experience of it. The stillness, the calm, the time for thought and then the chaos and need for split second reactions to keep control over whatever vessel you may be manning.

Things cross your mind out here and then immediately the thought is gone. The subconscious rises to the fore, it’s a mad world. But less mad than many lives on land. The financial world, media, industries run by at best unthinking idiots and at worst, psychopaths. If there’s change afoot, lets hope it comes soon enough. There is always hope. And yes, Stuart, philosophising out here is somewhat ridiculous. I’ll roll a smoke. 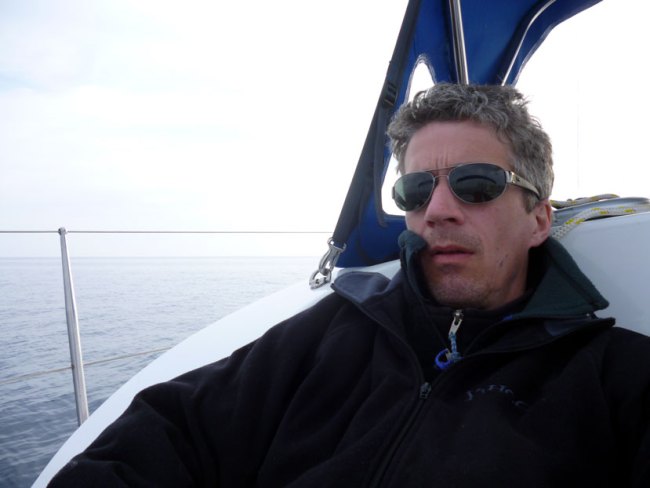 And all of a sudden, wind again! Out with the Genoa, down with the revs and we’re getting six and a half knots out of our girl. We hear Peter talking with another skipper coming out of Rhodes harbour to our south, another company vessel, we’re all on the last leg. Wonderful. Eve’s showing off as we count down the miles. It’s emotional. A wee pod of delivery boats heading for dock. Tonight’s going to be a hoot. Land once again, this time no euros, but Turkish Lira. Before all that, it’s all about Eve. Sail on you little beauty!

NATO security warning was just on the radio. We switched to channel seventy two and listened to a message “for the protection of all mariners”. Any suspicious activity should be reported to info@shipping.nato.int, an email address I would never have imagined existing. Perhaps it’s time now to fly our French flag. We’ve been sailing incognito all the way across the Mediterranean. We are from nowhere, is that considered suspicious? Three half crazy paddies on an unnamed boat, are we somewhat like a car with no registration driving all this way? We are just a number, officially, eight one two, or “the 8:12 to Eden”, as Dan puts it. 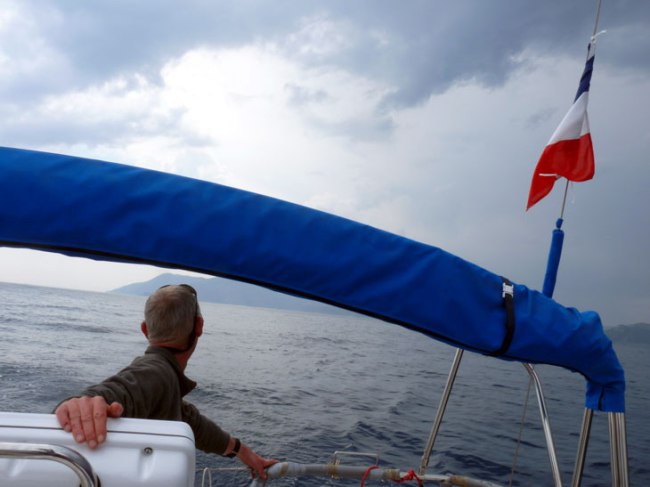 The lighthouse is where is should be. Good. The sea rolls, propelling us towards it. Our autopilot is working overtime to keep us on course. It freaked out earlier, lost the plot, quite literally. It’s tough to steer in those conditions. Waves come in from astern, Eve is lifted by them and surfs down into the trough, dramatically rolling from side to side at the waves’ convenience. Dan prepares an omelette for when we reach the bay. Another hour, then we’ll reach shelter, drop the mainsail, and use the Genoa to scoot across. Adam must be ahead, possibly with the two other boats out of Rhodes. Perfect. We represent our bosses well. It’ll look good, us all coming in together. The two others had left France at least a week before us, as we hadn’t met them in our overlong stay there. There was no plan to arrive at the same time, a nice coincidence. All we have to do is get there without incident. I’d pray to the Turkish God of the sea if only I knew who he or she is. I’ve got a feeling we’ll be alright, but no slacking at this late stage. We’re nearly home. Turkey beckons with massive thunderheads building along the coastline. We’ve had no rain but for the pitter-patter shower the last night in Pylos. A rare sound indeed, these last weeks. We might get wet before we make land. If not then, surely soon after. Big clouds, not at all annoying. I won’t mind, we could do with a little rain, as could the whole region from here across to Gibraltar. Rain. I never thought I would welcome the idea so much. All three of us knocked the ashtray over this morning. Eve needs another wash. Whether it will be by hose or rain, we’ll see. And we’ll see what I think of the idea of rain when or if it happens. 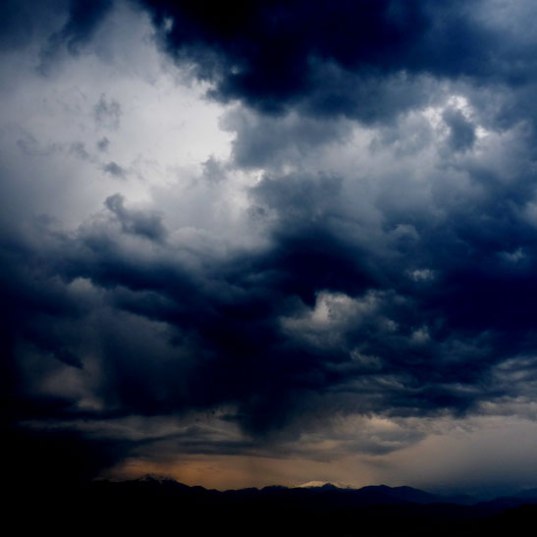 Gocek Bay. Or Fethiye Bay? Consulting our almanac it seems I was wrong, Fethiye is the larger town. We are crossing from the twin heads at the western point, flying the French flag after lunching on another of Dan’s magnificent omelettes. And this wonderful day, our last stretch, is made all the funnier for during the night we have somehow overtaken Adam. It must have been whilst I was sleeping. The last I saw of them was a tiny dot on the horizon ahead of us. Surely we can’t have passed them? Just before lunch, Mark rang Pete, “Yes Peter, where are you? We are in the bay about to have lunch.” “How did you get past me? We’re six hours out!” It was all our skipper needed to know, he’s delighted. The bay is about ten miles across, we’re way ahead of them. But how can this be possible? Is Peter fooling us? He must have gone to Rhodes, or have taken the southern part of the channel. We haven’t seen a sailing vessel since daybreak. I would know, I’ve been up since three this morning. No sign, no nada. The Cap’n sure has a pep in his step, a little grin skirting his face. This was never a race but of course there is a little friendly rivalry. The same exists between me and Luca, I must admit. So I’m grinning too. But how did we do it? It’s nothing to do with me, I was asleep. That’s my story and I’m sticking to it. 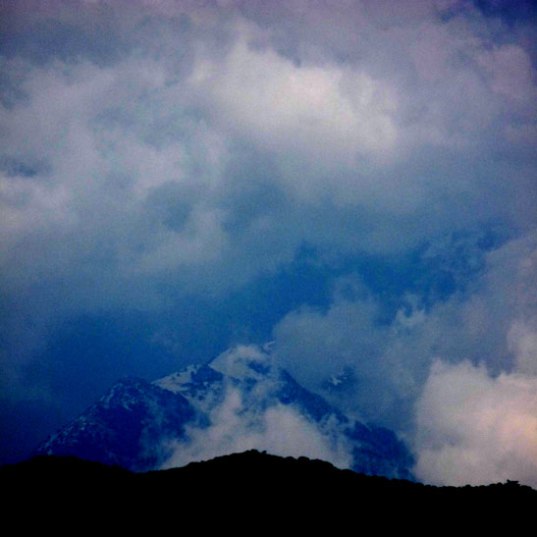 From the snow-capped mountains of the Pyrenees to the equal, in fact, more impressive mountains here.  Over 1,400 nautical miles in two weeks. It feels like two months. Or years, even. Big thunder booms out across the bay. We’re due rain, I believe we’ll get it. Hopefully it will wait until we’re moored. Hopefully. One last request to the gods? 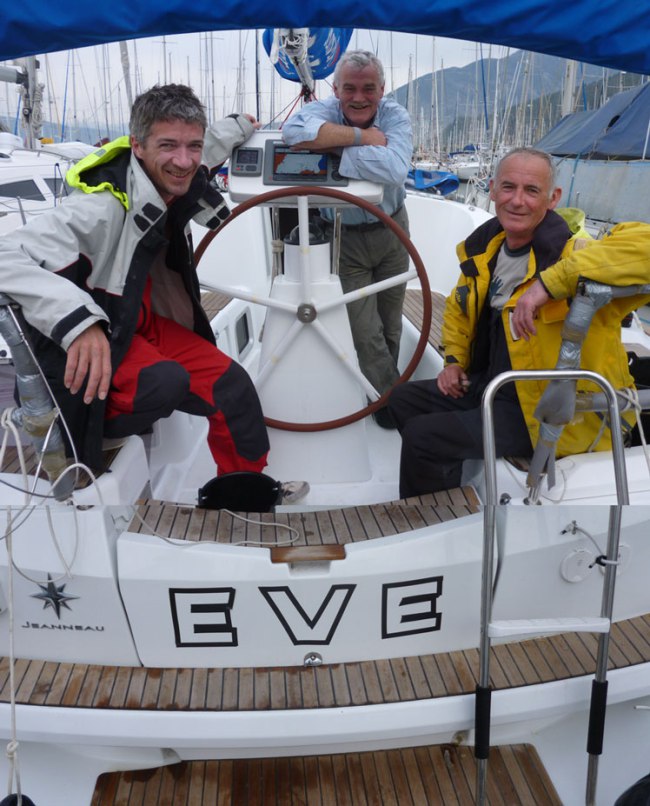