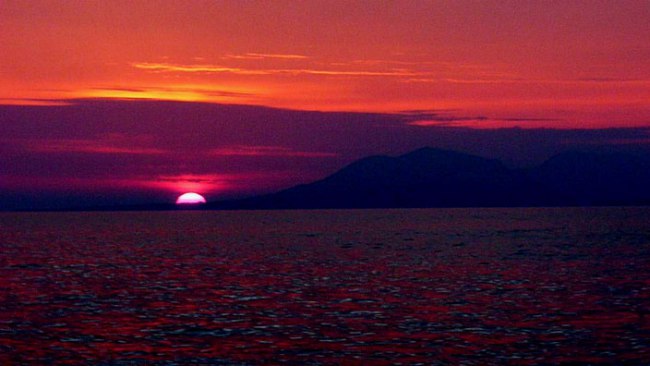 Dan woke me slightly early, eight miles east of the islands. A red ruby crimson sun rose over the northern headland. As red as the blood in my veins. So beautiful, but I can’t help thinking of the bang this place must have made when it blew up so so long ago. A tsunami wiped out the Minoan civilisation on the islands south of here. Buildings cling to the hilltops, roads zig zag their way up from the small access points along the shoreline. There’s no harbour here. Plans exist to build a marina but the current instructions are not to leave yachts unattended. If the north wind blows, the boat may be gone. It’s a peaceful morning for my peaceful soul. Sheerwaters skim the water’s surface, remarkable birds they are, I could watch them all day. 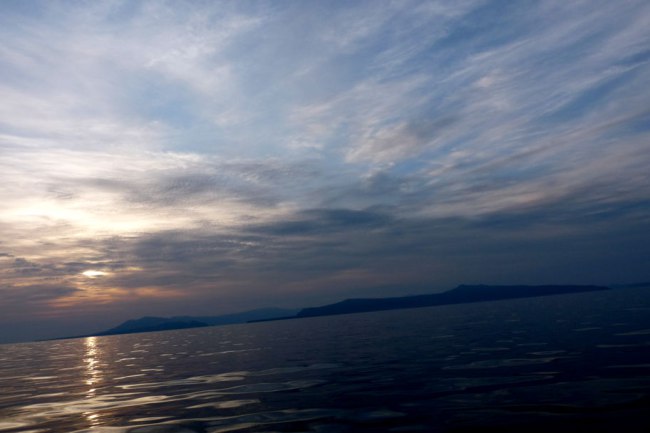 Heading due east at 5.5 knots. The morning’s clouds are gone and the sun beats down again. Eve is a cleaner girl now. We spent the early morning making her presentable to hand over on Tuesday in Turkey. I think it’s Tuesday, we haven’t been sure of the day in a while now. The date, yes, but the day? We barely know what the real time is. Confusion reigns. We hear that we aren’t going to Gocek, but another place in the same bay, Fethiya, five kilometres east. It might suit us better, Gocek sounds posh and we certainly aren’t. The promises of showers and restaurants beckon. Not that we’ve been eating badly but jesus a good shower would be wonderful. I showered in Pilos with a litre and a half of sun warmed water. Not altogether bad but a real good wash is necessary. I’ve my sleeping bag on deck. Ultraviolet rays from the sun kills bugs. That, along with the fresh air, is nearly as good as a wash when you’re out here. My blankets will go out later. I could do with washing some clothes but I think I’ll just buy a shirt and jeans onshore. We ain’t finished, but she looks spanking! Our little darling boat, we're going to miss her. 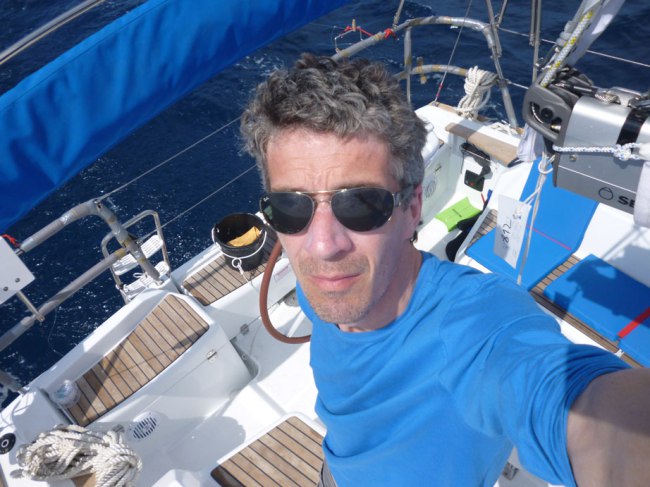 It has been a while since we had any passengers, the little birds who would flit around us before succumbing to the ocean. We did have a stowaway. A bee. We tried to keep it from going below but eventually it ended up in Dan’s cabin. He shooed it out and for a while it buzzed around the fishing line off the stern. It would rest on the line at times. It was funny to have this little thing with us, unsure if it would last the night, we put some honey in a bottle cap by the mast. On Eve, we like to treat our passengers with respect and equality. Well, until the flies arrived. Flies. On board. How, I don’t know. The first attacked me during nightwatch, frightened the daylights out of me. Respect and equality out the window, I hunted it down. To my horror, I found more. They were all over us. I went a bit crazy, severely disturbed by the idea of flies on our boat. Hence the cleaning, we’d let her go a little. Cigar ash, cigarette ash, even volcanic ash, hair, sand and dust sullied Eve’s curves. I’m glad I had cut my hair off before leaving Ireland, imagine all those curls on top of all this? No flies on us, or so I had thought. We hadn’t noticed how the fine ash from Mount Etna had settled all over her. Dirt from within the earth, crusty.

We’ve spent the last hour staring at land. Right beside us, we’ve passed so close. The only places where we’ve gone this near were the Calbrian coast and Lipari’s southern tip. This is a wild spot, a few small beaches, a few small buildings, some evidence of horticulture but not many signs of wildlife. As we approach a headland, the Captain tells us, “All sorts of wonderful things are going to open up.” Suddenly we can’t wait, our patience running low, anticipation reigns supreme. It’s been a long island, and featureless until this bay. There’s such a mixture of rock here. Some like petrified earth, some grey and fissured, blocks cut and resting on each other, tilted towards the sea as if waiting to tumble in. A deep crack reveals iron deposits, red rock. A few trees are visible on the biggest beach yet, giving us an idea of scale. I see a birds flying along the cliffs but lose it against the backround. No way to see wildlife, even through the binoculars. We’re still too far away. 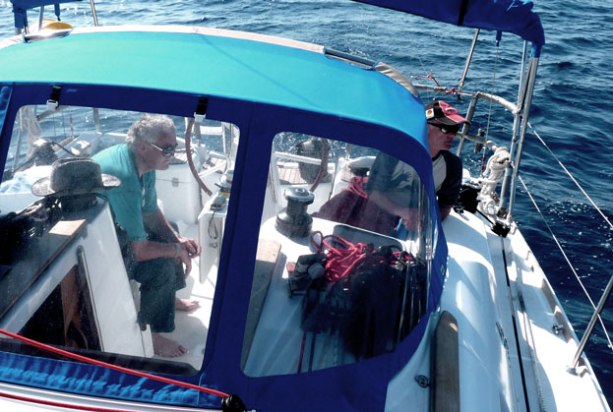 Indeed, Mark was right, this is wonderous! Astipalaia, a town that looks like it’s been hung out on a clothes line, smiling at us, like the moon last night and a valley we passed a while back. All things come in threes, they say. For these three smiles for us, we thank the gods. Another yacht came from the east, heading west, it’s racing hull making our Eve blush. At least she’s clean and shiny now.

Dinner at sunset, Mark did the honours. Dan looks at peace, we all feel it, drink it all in, a quiet evening. We don’t know yet if Dan has to go back home, we have no details of the next leg. We’ll only find out in Fethiya. 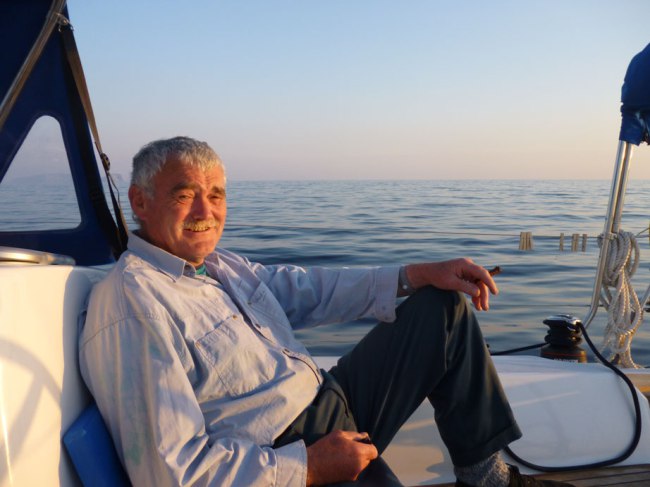 2100 A busy evening’s traffic. Just after dark, a ferry leaving Astipalaia fooled me. I took the lights to be street lights on land. The lights had stayed in position relative to the others in the town, and she had headed straight at us, sparking a discussion where I felt sure, for once, that it was not a ship. “Never say what a ship is going to do, only what it’s doing right now. Where it is, and what direction it’s pointing in, that’s all you’re going to know. They can change course at anytime, never trust them.” Another lesson from Mark. I keep learning, I hope. This one turned south across our stern. Another was heading north across our bow but did a semi-circle around us and ended up facing southwest behind us. Mark swapped watches with Dan. I’m still due up at 0300 hours, time to sleep. Five or six hours? Two nights in a row. Sheer luxury. And tomorrow the land of the Turks. As with Greece, it’ll be my first time there. Arriving by sea is proving a better option than flying in. And I’ll get a stamp in my passport, the first since Morocco. So, as I go to sleep, I pray to whoever out here my soul to keep. Lir, Neptune, Poseidon, guide us to our final destination, keep this ship safe on the last day of our journey to Eden. 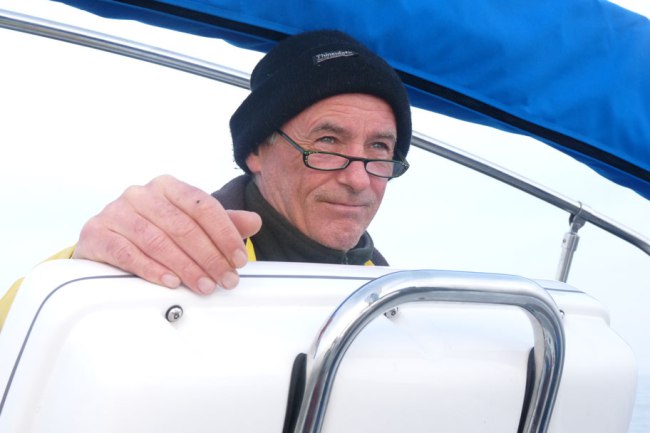