Nothing ever happens on the Tyrrhenian Sea

The Tyrrhenian Sea. The most interesting thing about it is it’s name, according to Mark. “Nothing ever happens here.” It’s 10.20am, I’ve been up since 3am. Squeaking helm wheel is a nightmare in the cabin, keeps interrupting my dreams. Night before last I dreamt of Electric Picnic crossed with Royal Ascot. Friends were with me but when they turned my way to speak, all I could hear as their mouths moved was the squeak of the wheel. Comically cartoonish. The wheel stays quiet during the warmth of the day. WD40 should sort it out. We have none. Last night I dreamt of a punk gig in my old house and a huge music festival in Dublin city. I wanted a chicken panini but couldn’t get one. We’re at 40°09’432 11°37’846E, playing Beltbuckle Overdrive on the ship stereo, I must tell the lads. 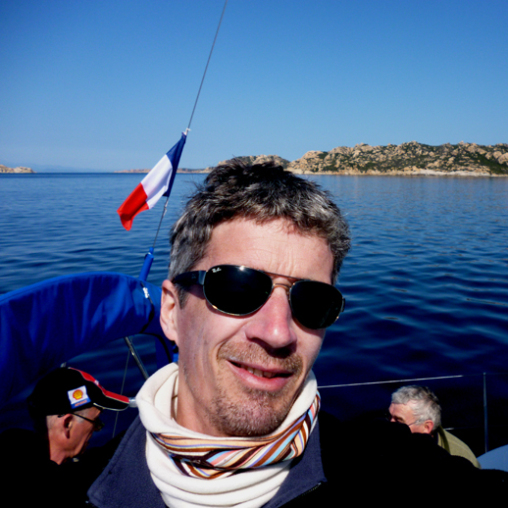 Passing through the Straits of Bonifacio and then Maddalena was awesome. Land all around us, evidence of life! Evidence, anyway. Posh holiday homes for the ultra-rich. I heard from my cousin in Milan that one of these super-rich Italian politician/businessmen had a place up here with a powerboat at the ready to escape, akin to the drug runner guy’s jeep, his "Donkey", in Romancing The Stone. Or was it a mule? And was Michael Douglas cool back then? The craggy island of Corsica made way for gorgeous Sardinia and with the binoculars I scanned the beaches for people, just to see someone, anyone, walking their dog, maybe but not a soul stirred this early in the year. We finally saw a couple of lads working on one of the many lighthouses. Nice to see other human folk, not that they paid us any mind. The rocks on the land on either side of us seemed full of spirits, as if to make up for the quietness. A fishing vessel confused our many issues as we passed Isola delle Bisce, near to Isole Cappuccini. A large tanker crossed our bow heading to a non visible Sardinian port. As the dark falls, this side of the island looks wild. 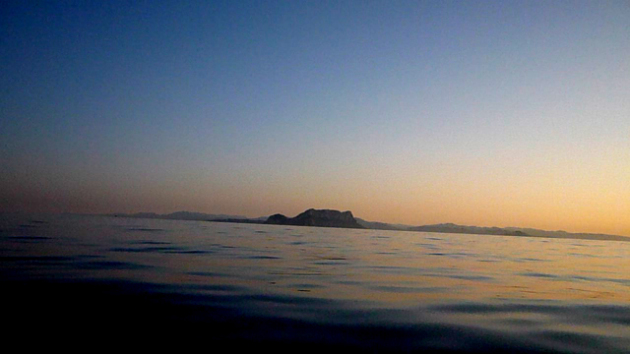 We’d had phone coverage all day but nobody texted me back. I felt deserted so I rang home, and left messages on the twins’ phones. Funny, it was very important for me to wish them a happy birthday. This journey really has that effect, you realise how much people mean to you. I’m realising I’ve got quite the list of postcards to send. From the early morning first sight of land and after hours and hours where we didn’t want to miss a thing, a gorgeous sunset finished our busy day. Strangely enough, the open sea was welcome after our brief fling with earth. Maybe it’s because we’re on the way now to Lipari, as Mark has talked the place up so much. And I don’t expect it to disappoint. It's my turn to cook pasta today, no more stew for Stu!

Later today…
I awake from a sun-induced nap where again I thought we were back in Canet with a noisy tractor parked beside the boat but this time I thought I was on the wrong boat. I was sure I was on Adam. On the wrong boat without my stuff. At dock. But neither of these were true. The fact was, we were motoring across the Tyrrhenian towards the promised land of Lipari. What state we will be in when we get there I don’t know. And this is only the first stage. Lipari to Turkey is yet to come. I obviously haven’t realised that I’m here. Or that I should be. I feel like Dougal in Father Ted. Does that make Dan Father Jack? Poor man. Too much sun, too much everything. Sensory overload. We’re all going a bit gaga, it spirals. I get up and struggle to bring myself back to reality. The Captain askes, “Where’s Lisa?” I dive below to the stereo and find Lisa Hannigan’s album, Passenger. It works, we calm down. I thank you profusely Lisa, you may well save our lives. On watch tonight I’ll be sure to wear the tether. Not that the sea’s rough, it’s not. And although I promised my Dad I’d wear it, it’s really because I don’t trust myself to stay on this boat. It’s too unreal. It’s like a movie set sometimes. When I figured the only way to find out if it’s real or not is to jump into the sea, I put on the tether. 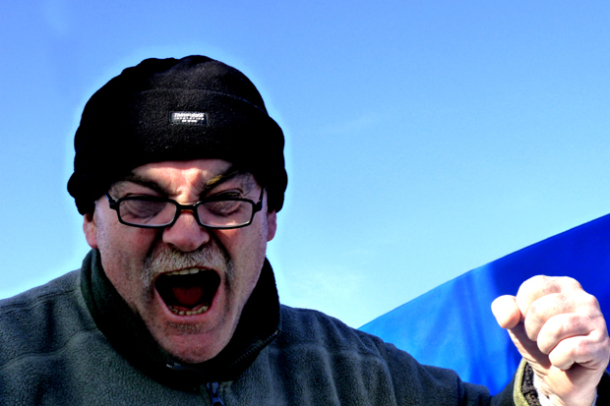 Mid-March and the sun is baking. Southern Europe will roast once more this summer. Maybe the global warming guys are right, maybe it’s the sun, maybe the Mayans were right, they were right about at least one thing. No breeze, nothing in sight except for Adam and the odd ship, one turtle we passed earlier and the poor unfortunate little birds that circle us wondering whether or not to land. They are doomed, they shouldn’t be out here. "Fish food", the skipper calls them. One set down on us and it’s partner kept flying around, unwilling to follow the example, until it disappeared. We’ve left a bottle cap of water and some nuts up on the bow. Maybe we’ll save this one, but I doubt it.

Our cigarette smoke hangs listlessly in the air, our 6 knots corresponding to the lightest breeze. Our 6 knots that will bring us back to land. Land that I secretly pray is still there. I can’t help thinking that nearly anything in the world could happen and we would know nothing of it. Save a nuclear holocaust, I guess we might notice that. I wonder if Rome, east northeast of our position, falls, would we have a clue?

18:15 Sunset. Unspectacular as was sunrise this morning save for a small line of birds purposefully heading east skimming the water’s surface. Ten or twelve of them, flying faster than our equally purposeful crawl. It’s nearing the spring equinox. Equal day and night for everywhere on the world as the sun sits over the equator, a dividing line between winter and summer for both hemispheres. Dublin will be different when I return, full of the growth of spring and about to pass into summer. As the sun drops and the damp comes in it’s important to prepare at the right time to keep in the day’s heat. Especially after a hot day. The body can lose it very quickly. I have some essential clothes drying in the hotpress after doing laundry today. These essentials, however, are the clothes that I laid out on deck or tied to the lines to air. But I left them out too long and they’ve gotten damp. No bother, they’ll be okay after dinner. There’s a bit of room in beside the hot water tank under one of the saloon benches. A hotpress on this yacht, but I’m still not used to the idea that Eve is actually a yacht. I’m glad to say she at last feels like a boat to me now. I trust her more although I imagine that has everything to do with the fact that we’ve been motoring since about 36 hours after leaving France. Calm seas, not a sausage of wind, she plods along perfectly upright. Wonderful when it’s omelette for breakfast and your coffee won’t spill, bad if you’re paying for the diesel. And except for Adam we haven’t seen any other sailing vessels. Not too many ships yet, either. The days have been quiet, and my watches too. Did I write about the French Naval helicopter that buzzed us 50 kms off Canet? The most exciting event to date! I was alone on deck and suddenly it appears, having approached us on our blindside (we can’t see through the Genoa). I called skipper up and we waved at the easily visible pilot. He flew over to Adam and then fecked off.

Oh I’d better sort my clothes. The clothes I washed are for land, as will be my shower and shave tomorrow morning. Land. And then stage two to Turkey, with a possible stop in Greece, weather depending. We need wind, we can’t do the whole trip like this. Too much fuel and too little to do. Three men in a tub, rub a dub dub. We need to sail, this is a yacht, isn’t it? But no complaints, when we get high winds, big seas and rain I’ll curse these words. (I’m glad I’ve only written them down, such words are not to be spoken) I’d better shut up. 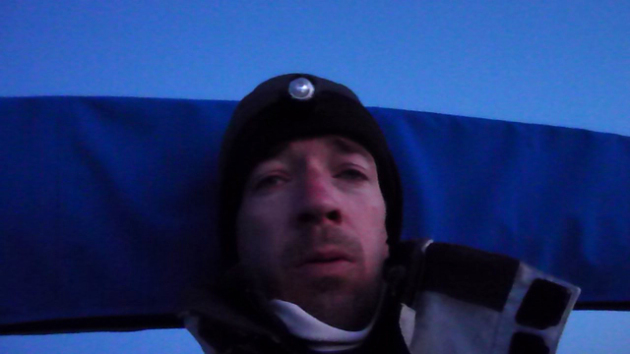 I sit here watching the sea. Each wave with it’s own mini-life lasting for milliseconds. This sea is calm. Like old leather but in constant change. Some waves merely ripples, some higher than others, all with their own personality. And us, in constant movement across it. That’s the thing, I hadn’t thought about it before. We haven’t stopped. There is no stopping. We continue, on and on, over the never ending water. There ain’t no stopping this bus! It’s too unreal. I control another irrational urge to jump into it, as if I again need to convince myself of it’s reality. I am going mad. Getting cold now, I go down below to get my hat, Mark is cooking, “Nothing to report, Sir!” I imitate Master & Commander. “Carry on Mr. Doyle!” We laugh. But we have gone that bit mad. Apparently it’s normal. I ask myself, “Did I forget to log our position at 1900 hours?” but then realise it’s only 1845. We’re at 39°40′.267N 012°35′.729E, by the way. Speed 6 knots, course over ground 125°T. Bang on. 131.4 nautical miles to our next waypoint near the volcanic island of Lipari. Tomorrow, land, pizza, wine, phonecalls home. It’s getting dark, I have to figure out how to dim the navigation unit, hold on.

I could sit here with my thoughts or I could write them down. Everybody expects songs from me about this trip, myself included. A tune I wrote in 1995 still needs lyrics. It was always a seafaring tune, I’ve never been happy with the words I’ve put to it, and I’ve tried over and over again. But if a love song cannot be written if you’ve never been in love, so a mariner’s song cannot be written by a landlubber. So finally am I a mariner? Taking after my Pop, my Dad’s Da, a Howth fisherman? Is this small easy journey enough to qualify me? It should be enough, I think. Should it be enough?
I remember now earlier today, as I was hanging out my clothes, Dan says to me, “You must be disgustingly proud of yourself!”
It’s the way he tells ’em.
Small rolling waves follow us obediently. They look suspicious, I hope they have a sense of humour.