At sea. This is special. Left Canet just before dawn. I’m writing this just after sunset. We glimpsed a bottle nose dolphin soon into the journey. Hours later we were joined by a common dolphin who surfed our bow wave. Briefly there were two of them. Now, twelve hours since leaving dockside, we are at 42° 24′.765N, 04°31’413E. The wind is 10.3 knots from the starboard quarter. We’re doing 5.3kt. The lads are having a cuppa after a dinner of rabbit stew. Rabbit stew, at sea. Mark reckons the crew will be hopping about the boat. I wonder what my dreams will be like. Last time I ate rabbit I dreamt I was a superhero, Rabbitboy, in the big city. The Chief would call me and I’d come bounding after the crooks in my semi-bionic robotic rabbit legs. I don’t need those dreams out here. 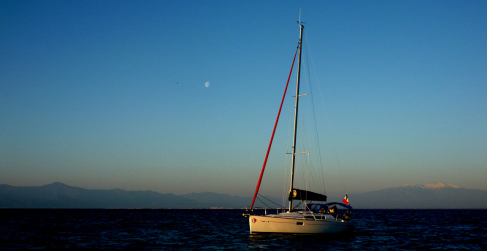